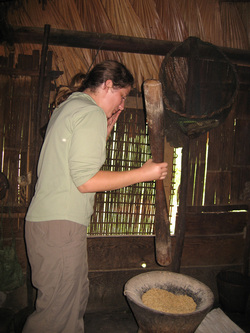 Field Work, Nakai Nam Theun National Protected Area, Laos, 2008
If we assume that justice for forest peoples leads to greater involvement in decision-making processes and increased benefits-sharing, then from the perspective of the state, justice for forest peoples in forest governance interventions could undermine state power by empowering historically marginalized groups. Yet, we see significant investments by state and non-state actors dedicated to improving the justice outcomes of conservation initiatives in both democratic and authoritarian states. This empirical reality suggests that justice for forest peoples may be in the interest of global forest governance actors (states, non-governmental organizations, international organizations, and firms), prompting a number of questions: why do global forest governance actors pursue justice? Whose conceptualizations of justice do they pursue, for whom, at what scale, through what means, to what ends, and to what effect? Importantly, despite efforts to promote more just conservation, particularly through global initiatives, claims of injustice persist and are increasing in visibility and scope. My research examines this apparent gap between global policy and national implementation and finds that the persistence of justice claims are not simply the result of poor forest governance, a lack of political will among policy-makers to uphold their commitments, or continuous ratcheting up of justice demands from forest peoples. Instead the justice gap emerges from a cognitive disconnect between how justice is institutionalized in global forest governance and the justice aspirations of forest communities.

Drawing on an expanded social theory of institutions and institutional change, Fixing the Justice Gap provides an in-depth exploration of the multivalent nature of justice and explains how  norms serve to constrain the opportunities for justice for forest peoples. This research asks: what are the barriers to delivering justice to forest-dependent communities? I approach this question through a multi-sited, multi-method investigation that draws from nearly two years of fieldwork in Laos and Southeast Asia, as well as ethnographic field work at the 10th Conference of Parties to the Convention on Biological Diversity, the 2014 World Parks Congress, and the 21st Conference of Parties to the UN Framework Convention on Climate Change. The analysis blends an extended case study of Laos with the innovative methodology collaborative event ethnography to trace how ideas, norms, and principles of justice emerge, diffuse, and evolve across multiple scales of governance, from global policy arenas to forest community households. The findings reveal that particular conceptualizations of justice have become a central part of the metanormative fabric of global environmental governance, constraining institutional evolution and therewith perpetuating the justice gap in global forest governance.

Despite the steady proliferation of participatory approaches to environmental governance interventions, there is evidence to suggest that participatory approaches do not always improve project outcomes and, in some cases, harm communities (Cooke & Kothari, 2001; K. McKinnon, 2007; 2006). Moreover, claims of injustice related to environmental governance projects are prevalent (Marion Suiseeya, 2014). This suggests that participatory consultation processes are either poorly implemented, poorly designed, or are simply the wrong institutional fit for addressing the problem (Young, 2002). It is this question of institutional design—the question of how to get participation “right” for project-affected communities—that is the central puzzle motivating our research.

This project will address this critical gap in the literature and in practice by identifying the specific mechanisms in participatory consultation processes that have the potential to lead to improved social, economic, and environmental outcomes. In a large proposal that will follow this work, we will plan tests of these mechanisms in the field with randomized experiments. While scholars and practitioners continue to promote and develop new modes of community engagement and consultation, there is little evidence indicating which mode and approach are most effective. Instead, practitioners and scholars develop increasingly complex, costly, and often burdensome approaches based on the premise that more intensive consultation will lead to more just outcomes. Through the proposed research we seek to isolate the particular mechanisms in consultation processes that enhance or detract from project effectiveness.

Examining the Politics of Indigenous Representation in Global Environmental Governance

In recent years, however, indigenous peoples have steadily gained access and opportunities for representation in international policy-making arenas. This increased participation is particularly visible in global environmental governance, such as the UN Framework Convention on Climate Change and the Convention on Biological Diversity. Yet, despite the resources and attention dedicated to indigneous representation and the increased presence of indigenous peoples in global environmental governance, their influence on decision outcomes remains weak.[4] In this project, we seek to develop a model of influence by identifying and examining the pathways through and conditions under which marginalized and underrepresented groups effectively pursue representation and affect governance processes that directly impact their ways of living.

This project includes the following components: